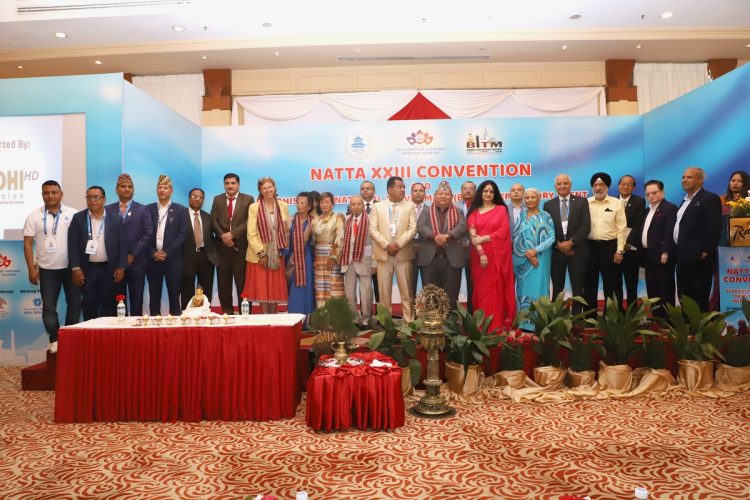 On 30th March 2022, NATTA XXIII Convention was held at Radisson Hotel Kathmandu. The theme of the celebration was “Rejuvenating Through Spiritual Tourism” to bring a special focus on spiritual tourism.

In addition, NATTA also organized a preparatory event for Buddhist International Travel Mart (BITM). The event was organized as a preparation for the second edition of BITM going to be held at the end of May 2022. The event organized together with the Convention was conducted to publicize and familiarize it with a wider network of tourism industry around the world.

On this occasion, a book entitled NATTA Journey 2020-2022, having information on all the activities accomplished by the Executive Committee and all NATTA Provinces during the 2020-2022 tenure along with a new brochure of BITM was unveiled by the Chief Guest.

Special Guest and Key Note Speaker, President of TAAI Mrs. Jyoti Mayal presented her speech in the context of “Adapting to the New Normal in the Tourism Industry after the Global Impact of COVID-19 with the Role of Associations”.

Also, Special Speaker His Eminence Mingyur Rinpoche performed a special Puja together with the Chief Guest and diplomats presented at the event. Mingyur Rinpoche highlighted the importance of Meditation and the philosophical aspect of Buddha’s teachings.

Yet another book titled “Buddhist Pilgrimage Tours in Nepal: Overview and Itineraries”, written by the experts of Buddhism and published by NATTA was unveiled. The book was launched jointly by Mingyur Rinpoche, President of Bouddha Mahasangh, Ambassador of Sri Lanka in Nepal, H.E Himaee Subhasini Arunatilaka, Ambassador of German in Nepal, His Excellency, Ambassador Dr. Thomas Prinz and Mr. Achyut Guragain NATTA President.

From this year onwards NATTA introduced new Awards in the initiation of Convener of Council of NATTA Past Presidents, Mr. RR Pandey in the memory of two special personalities which will be distributed every two years to the deserving candidates. ‘Khagendra Raj Pandey Memorial Travel & Tourism Award’ was conferred to Mr. Jagrit Prasad Lamsal for outstanding academic results in his Master’s Degree in Tourism & and the ‘DN Pradhan Memorial Tourism Entrepreneurs Excellence Award’ to Mr. Navraj Ghimire, Managing Director of Annapurna Travel & Tours Pvt. Ltd.

During the event, His Excellency German Ambassador of Nepal, Dr. Thomas Prinz shared his special remarks representing the diplomatic community of Nepal. H.E shared about the potential for the development of Nepalese tourism. Likewise, the Chief Guest of the event, the Honorable Tourism Minister emphasized Nepal’s planning for its tourism development and gave much assurance about the future of Nepal’s tourism.

The Convention was then followed by a BITM Preparatory Event that was full of insights and ideas shared on Spiritual Tourism along with the prospects of BITM. The Preparatory Event dealt with the theme, ‘Rejuvenating Tourism Through Spiritual Tourism’, through dialogues, presentations and comments by the Speakers of the event. Mr. Deepak Raj Joshi, Former CEO of Nepal Tourism Board and Vice Chairman of World Tourism Network and Mr. Punya Prasad Parajuli, a Buddhist scholar, translator of Tibetan language and faculty of NATHM presented their visions of tourism post pandemic in the national and international scenario and context of upcoming Buddhist International Travel Mart (BITM). The event was moderated by Mr. Mukunda Bista, a Buddhist practitioner.

Later, Token of Appreciation was awarded to Speakers, Special Guests and Sponsors.