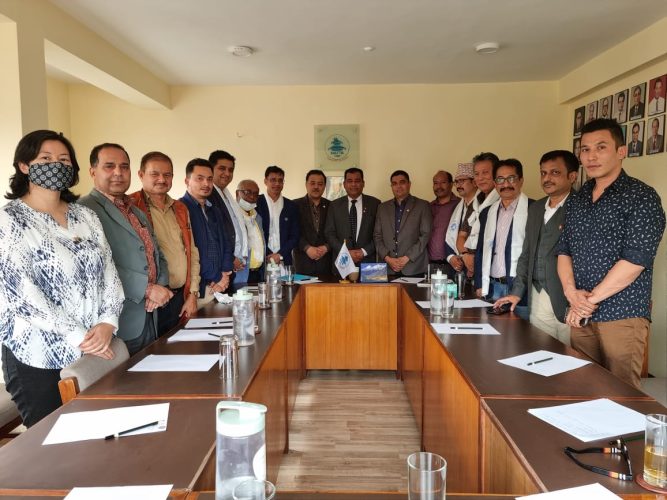 After the official formation of NATTA Province No. 2 in Bardibas, the first meeting together with newly formed executives of Province No.2 and Central Executives at NATTA Secretariat on 4th April 2021. Also present in the meeting were the CEO of the Nepal Tourism Board, Dr. Dhananjay Regmi and delegates from the Hotel and Tourism Entrepreneur Association.

The meeting was held under the chairmanship of NATTA Central President Mr. Achyut Guragain and had the presence of IPP, Senior Vice President, Vice President, Secretary General, Treasurer and Joint Treasurer.

President Mr. Guragain firstly welcomed all the delegations present in the meeting. Mr. Guragain then highlighted the infrastructure development and promotion of the different potential destinations of Province No. 2.

The meeting focused on potential tourism aspects of Province 2 and how it can further be promoted with various programs. The Provincial President Mr. Mohan Sharma requested NTB and NATTA Central to coordinate and support the further programs.

Speaking at the meeting, CEO Dr. Regmi assured that since NTB is also promoting Provincial destinations, he assured on the full cooperation on the endeavors of NATTA Province 2.

Province No. 2 is a major tourist destination which consists of Ram Janaki Mandir and Janakpur Railway Station, Mithila Art attracting several devotees and travelers every year has helped in the development in tourism of this state.