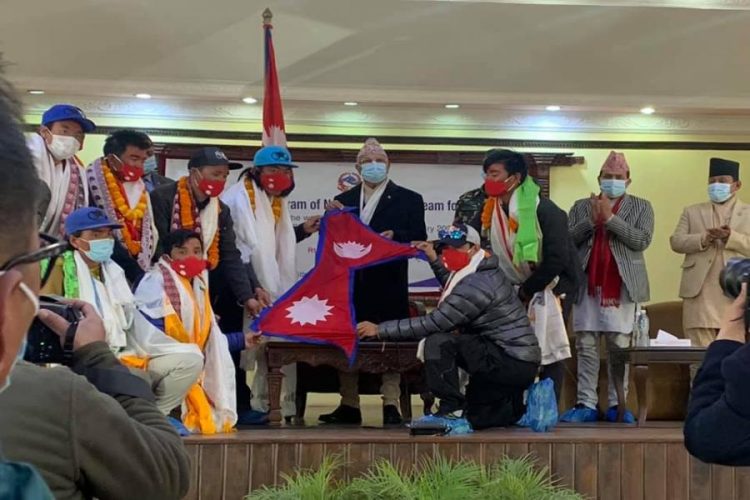 Nepal Tourism Board (NTB) in coordination with Nepal Mountaineering Association (NMA) organized a welcome and felicitation program on 26th January 2021 in honor of the 10 members Nepali Team who successfully created history by summiting Mt. K2, the World’s second tallest mountain, the first time ever in winter season. The ascent was also historical as Mr. Nirmal Purja MBE, the team leader summited without using bottled Oxygen.

The Team arrived Nepal on 26 January 2021. The team was impressively welcomed at the TIA by officials from Ministry of Culture, Tourism and Civil Aviation, Nepal Tourism Board and members from Nepal Mountaineering Society.

Rt. Hon’ble Prime Minister of Nepal K.P Sharma Oli felicitated the Team Members with Letter of Appreciation at a separate program organized by NTB at the PM’s residence, Baluwatar. The Team presented Prime Minister with the Nepali flag which they hoisted atop K2 Peak.

Nirmal Purja, the team leader shared the Team’s experience and hardships they had to face during the climb. “It’s time for the World to know and recognize the real Mountain Heroes” quoted Mr. Purja who is also a Guinness World Record holder for climbing all 8000mts peak in 6 months.

Addressing the gathering Rt. Hon’ble Prime Minister congratulated the Team for their historic achievement which has not only value added the image of Nepali Mountaineers but also have glorified the image of Nepal in the World especially in the international Adventure and Alpine sector. The Prime Minister has also announced to initiate Special Award in the Mountaineering/Expedition Sector and also assured of financial and procedural support for Record Breaking Nepalese Expeditions in future.

Dr. Dhananjay Regmi, Chief Executive Officer of NTB compared this accomplishment by the Nepali Team as the second big thing in Mountaineering Sector after the Everest triumph in 1953. He emphasized that such feat in Mountaineering by Nepalese Team will be paramount in enhancing Nepal’s image in the international Alpine Community which shall further support in Nepal’s tourism promotion.