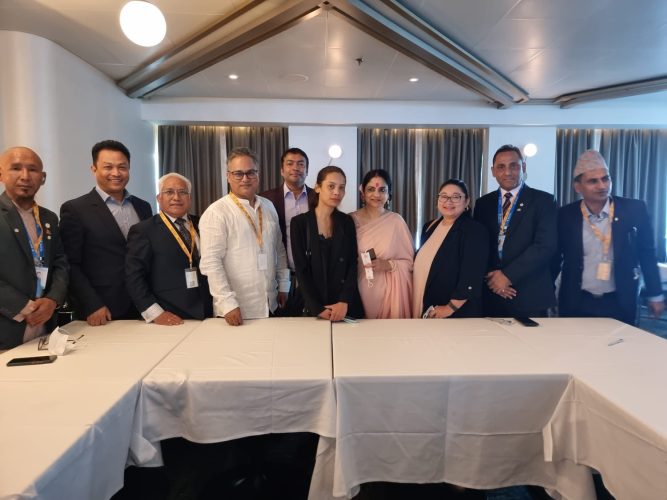 Regional Tourism, Rebuilding Connect and addressing the needs of a Connected Traveler was the theme of TAAI’S 66th convention, the three-day event which was held aboard the Spectrum of the Seas of Royal Caribbean from August 22-25, off the coast of Singapore.

The convention was attended by over 300 members of the Travel Agents Association of India (TAAI) as well as media and representatives of tourism departments of several Asian countries and airlines including key representatives from Nepal Tourism Board, NATTA, Sri Lanka Tourism and Kazhak Tourism.

At the invitation of TAAI, Nepal Tourism Board and NATTA jointly coordinated the tourism stakeholders from Nepal to connect with the travel fraternity from India and other countries. The delegation of sixteen tourism personalities participated in the Convention.

During three days, a Press Conference and Nepal Night Program were also organized by NTB highlighting the tourism potentialities and encouraging the visitors to visit the country to and fro.

In the spirit of regional tourism, the cruise also headed to Malaysia, where Penang Tourism hosted a special event for the visitors.